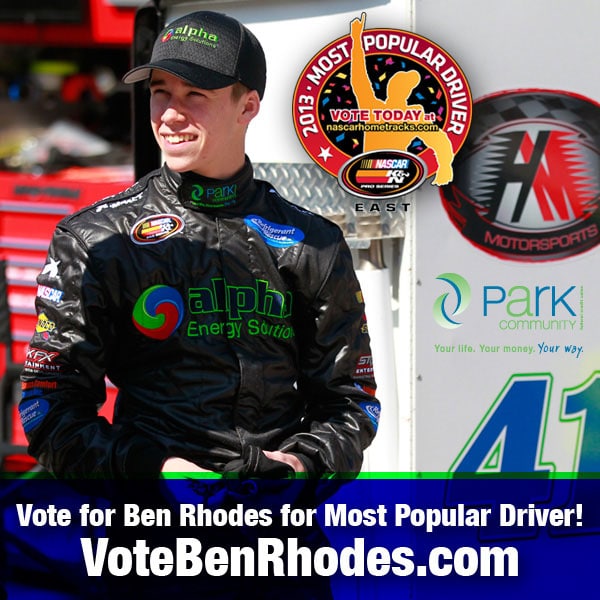 The title of Most Popular Driver in NASCAR’s K&N Pro Series East may elude him, but Ben Rhodes knows that he’s got plenty of support from the Alpha Energy Solutions family and network.

Rhodes received nearly 5,000 votes during the online voting contest, which ended Nov. 30 after 44 days. Until the actual last hour of the voting, Rhodes was in the first place, thanks to a strong show of support throughout Kentucky.

Rhodes got plenty of support from Alpha employees and customers. But that wasn’t all – sponsors Park Federal Community Credit Union and the Kentucky National Guard, as well as the Catholic Sports Network, all sent out appeals for support. Unions that do business with Alpha Energy Solutions got behind a push for votes as well, as did Ben’s classmates at Holy Cross High School and even the I AM Dixie Highway Facebook group.

“I know a lot of people spent time during the contest voting, and I really appreciate the support,” said Rhodes, who has enjoyed an excellent year of competition on the racetrack. “It’s great to know that so many groups of people were supporting me in this contest.”

The strong showing can only help Rhodes as he builds on his reputation as an up-and-coming NASCAR driver.