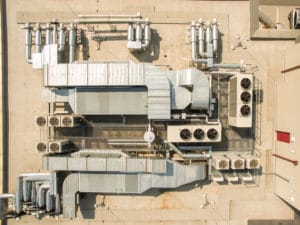 It is a well-known fact that Commercial And Industrial HVAC systems are one of the most commonly used complex systems consisting of individual components and smaller systems. It is not just an AC or heater, it is the entire structure that is used to regulate the temperature of a building. The entire system would suffer if even one component malfunctions. In short, all HVAC parts are important to the daily operation of the HVAC system. Especially in commercial and industrial HVAC systems, each component has its significance. 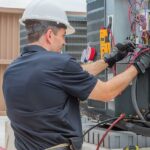 One of the simplest and smallest parts is the thermostat. This temperature regulating device is capable of controlling the amount of heating and cooling the entire building would get. There are different types of thermostats available in the market right now, cell-powered, electrical, programmable, and smart thermostats. It depends on your requirements which type would suit you better.

It is a famous myth that air conditioners are solely responsible for providing cooling. This is simply not true, more so when talking about commercial and industrial air conditioners. It needs to work with other systems to supply cooling to the property. On its own, the AC is supposed to remove the heat from the interior of the property as well as dehumidify it. One big difference these systems have from residential systems is that they are central air conditioning systems, not the traditional split systems used in residential areas.

The compressor is another important component of the main Commercial And Industrial HVAC parts. It is used to circulate the refrigerant to and from the evaporator and condenser coil. The condenser is also used to change the physical state of refrigerant, liquid to gas, and vice versa depending on the need. Refrigerant is usually in gas form in a normal state, so it is compressed to raise the temperature. It is then passed to the condenser itself, and that is when the cooling process starts in earnest. 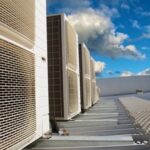 Moving on from the cooling side, we have the heating and Commercial And Industrial HVAC parts. The condenser or heat exchanger removes the heat from the interior of the building to the exterior of it, hence the name heat exchange. It is also responsible for changing the physical state of refrigerant but as opposed to the compressor, the involvement of the condenser in this process is direct. Also, it is the direct opposite of AC, as it collects the heat from the exterior into the heat pump.

Contrary to what the name might suggest, the thermal expansion valve is an active part of the air conditioning process. Located in the interior of the air handler or at the front of the evaporator coils, this part lowers the pressure in the liquid refrigerant to allow it to expand. As a result, the refrigerant changes from liquid to gas and then goes to the evaporator coil for the next step.

Air handlers are responsible for housing other Commercial And Industrial HVAC parts like evaporator coils, blowers, and subcomponents including racks, dampers, chambers, sound attenuators, cooling and heating elements, etc. among them, it is the evaporator coil that not only contains but also carries refrigerant, hence it needs the most care. On the other hand, the blower blows the treated air in the vents.

Just like air handlers, terminal units also serve as housing units for the blower, coils, and air filters. Unlike other Commercial And Industrial HVAC parts, the terminal units come in different sizes and are placed near duct returns or ceiling walls. 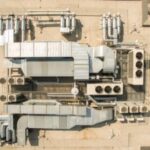 Chiller is that one Commercial And Industrial HVAC part that is not exactly necessary but having it can make the work of the system a lot easier. Chillers are used to keep down the temperature of different processes throughout the building, and they come in different types.

The furnace is an important part of the heating system, as it provides heat, working directly against the AC. The heat that is produced in the furnace is distributed through the blower to the vents.