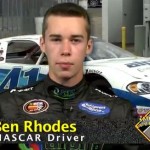 Ben Rhodes, the 16-year-old driver of the Alpha Energy Solutions racecar, will remember August of 2013 when he finally broke through to victory lane on the NASCAR Whelen All-American Series Late Model Stock series.

First, in Kingsport, Tenn. Then the very next day in Hickory, N.C. And then a week later, back in Kingsport. Victory lane times three, his first wins since he began competing in late model stocks in 2012. Three wins in four races. Here’s a recap from Rhodes’ web site.

“What an amazing weekend,” said Rhodes, after taking the first two wins. “This was a long time coming.”

You can hear more from Ben Rhodes in a 12-minute podcast interview here.

It’s been quite a year since Ben turned 16 in February. In June, he was named to the NASCAR Next program, an honor bestowed on just a handful of young drivers with great potential. He’s been featured in television commercials for Alpha Energy Solutions and the Kentucky Office of Highway Safety.

Up next is more racing for the Holy Cross High School junior. The fall schedule is full of more opportunities to make a name for himself and his main sponsor, Alpha Energy Solutions, as well as the team’s other valuable sponsors. They are Kentucky National Guard, Park Community Federal Credit Union, Alliance Comfort Systems, and Refrigerant Rescue.