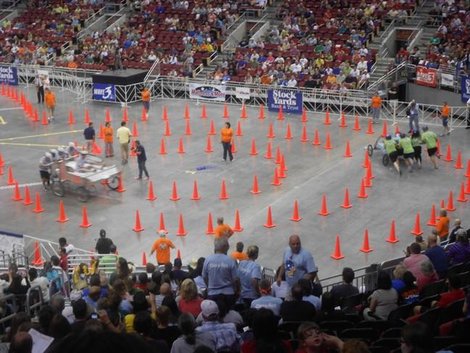 For the first time, Alpha Energy Solutions is entering the Kentucky Derby Festival’s Great Bed Races. As you might expect, the company is going all out to excel.  Local and regional companies will enter more than 40 beds.

Of course, Alpha’s driver is NASCAR Next driver Ben Rhodes, the current points leader in the NASCAR K&N Pro Series.  The races take place at Broadbent Arena at the Kentucky Exposition Center, and teams compete for time in a Crazy Eight track.

One key to victory is having strong and fast athletes pushing the bed. And thanks to our partnership with Louisville Catholic Sports, Alpha’s team will be powered by a group of current and former college and professional athletes, led by professional pole vaulter Chip Heuser.

You can’t win, of course, without the best equipment. Alpha’s bed is being built using only the most modern materials and is custom-made for this event. It will be FAST.

The event will be televised live on April 28 by WAVE-TV in Louisville. Admission is FREE with a Pegasus Pin, so make plans to attend.