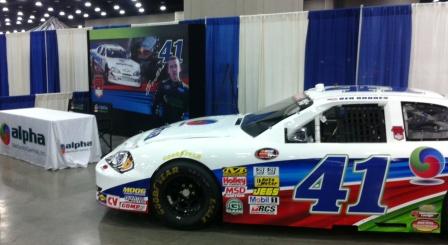 For the third straight year, the Alpha Energy Solutions #41 show car and driver Ben Rhodes will be featured at the Carl Casper’s Custom Auto Show at the Kentucky Exposition Center this weekend.

Alpha’s booth in the South Wing at the Kentucky Exposition Center.

In his most recent K&N start, Rhodes earned the pole for Tuesday’s Daytona race, broadcast nationally on Fox Sports 2. After staying in the top 3 for the first half of the race, he was swept up in a wreck and fell to 15th.

This weekend, a crew from the new TV show, “On Track with Ben Rhodes,” will tape a future broadcast segment. The program, which airs Saturdays at Noon on Louisville WBNA-21 and Sundays at 2 on WBKI-34, is also available on YouTube through the Ben Rhodes’ site.

Please come on out to the Car Show this weekend, visit our booth, and say Happy Birthday to Ben Rhodes.