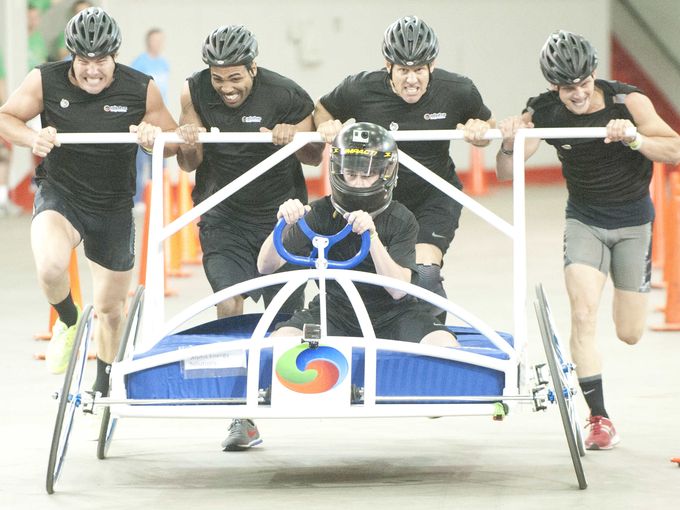 Alpha Energy Solutions’ first-time entrance in the Kentucky Derby Festival’s Great Bed Races was huge. See the coverage of the event below:

And here’s the story from the Ben Rhodes web site:

LOUISVILLE, KY (April 29th, 2014) – 17-year-old Louisville, Kentucky, native and NASCAR Next driver Ben Rhodes raced his way to victory in a different fashion on Monday, April 28th, as he was the driver behind the wheel of the winning Alpha Energy Solutions bed in the champions division of the 25th-annual Kentucky Derby Festival Great Bed Races at Broadbent Arena in Louisville, Kentucky.  Rhodes and the team won in the night’s final race, dethroning a five-year champion of the event in Alpha’s event debut.

The Great Bed Races, which began in 1990 as one of the many events leading up to the historic Kentucky Derby, put teams up against the clock on a figure-eight track for one lap to see who can come out on top with the best single-lap time.  A team consists of one driver with four pushers on a custom-made bed, using human power instead of horsepower, to navigate the course.  The Alpha team did their lap in 33.41 seconds, beating out five-time champions Curtain Call Photo Booth, who held the fast time throughout the entire event by just a mere 0.56 seconds.

“It was a blast,” said Rhodes.  “All of us on the Alpha team put all our efforts into our debut in the Great Bed Races, and it paid off.  The guys were pushing hard, and we got a little loose in turn one, but we were good all the way around the rest of the course and didn’t hit a cone.  The most stressful part was waiting to hear our time and if we beat the other team.”

The Alpha team consisted of some top athletes in the Louisville area.  With Rhodes behind the wheel, the four pushers were Jeff Ellison, COO for Heuser Health and a Cross-fit athlete; Patrick Smalley, Director of Training at Heuser Health who is ex-military and a collegiate football player; Chris Daniel, founder of SocialSphereStudios and the former University of Kentucky and professional Pole Vaulter, as well as Chip Heuser, Executive Vice President of Heuser Health and President and Meet Director for Vault in the Ville, who is also a former University of Florida and the University of Oklahoma and current professional Pole Vaulter.

Along with the muscle to get the winners’ trophy, Alpha had a one-of-a-kind bed with some NASCAR engineering behind it.