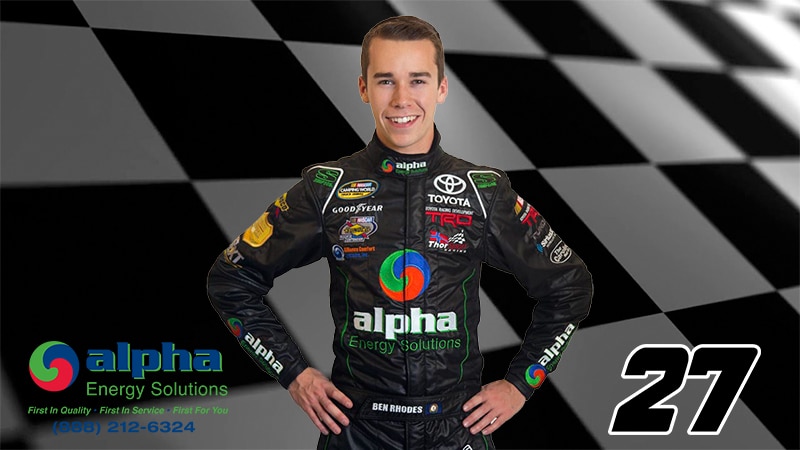 Louisville, Kentucky (February, 3, 2017) – Alpha Energy Solutions, a regional self-performing commercial and industrial mechanical service provider, is pleased to announce the continued support of NASCAR champion Ben Rhodes in 2017 as he races the No. 27 Toyota Tundra at ThorSport Racing in the NASCAR Camping World Truck Series (NCWTS). Alpha will be the primary sponsor for two of the 23 races for Rhodes – Kentucky Speedway (Sparta, KY) in July, and Bristol Motor Speedway (Bristol, TN) in August.

“Ben Rhodes has been a great ambassador for Alpha Energy Solutions over the years, and we are proud to continue to support his racing efforts in 2017,” said Gerry Lewis, Director of Sales for Alpha Energy Solutions. “Ben’s on-track performance and off-track professionalism has been integral to our marketing program and continued growth. We are honored to be able to be a part of the No. 27 Toyota Tundra this season as he drives for victories and the series championship.”

Rhodes’ primary season sponsor will be named in the near future.

Ben Rhodes, the 2014 NASCAR K&N Pro Series East (NKNPSE) Champion, Rookie of the Year and Most Popular driver, returns to ThorSport Racing and the NASCAR Camping World Truck Series (NCWTS) in 2017 piloting the No. 27 Toyota Tundra and contending for the series championship title. Rhodes, a 19-year-old Louisville, Kentucky, native, began racing go karts when he was seven years old, and has amassed multiple victories and championships throughout his climb up the ranks to NASCAR’s premier divisions. To learn more, visit www.benrhodes.com.